In which we settle down in Amsterdam – I start to make models. Water Rat Models is born.

For many years I had a hobby, which was making model tanks.   I have long had a fascination with tanks, not as killing machines, but more as a sort of mechanised dinosaur.  There is something curiously animal like about tanks, the way they can go anywhere they want, the way they move, are immensely powerful and when moving in battle order, all buttoned up, there is no indication that they are actually under the control of a human being.. They have a life of their own.

Anyhow, I had made hundreds of models of these beasts, and a friend of mine, Tim knew of this hobby of mine, so when a Dutch architect he worked for ran into problems with his normal model maker, Tim suggested that I might like to have a go at finishing the model house that the model-maker had started but not finished.

As we needed money, I felt that it would at least be worth giving it a go, and so it happened.  I was given the half finished model, and set about finishing it.

The model that started it all…….. 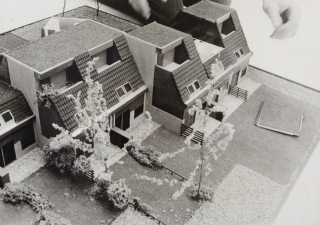 Both my wife, Lotty and I worked on this one, discovering techniques that were needed to make such a model, and I am happy to say that the architect was pleased with what we had created for him, and promptly gave me another commission… Which was followed by a steady stream of further commissions.. So there I was, a model maker

So I decided that this was an enjoyable way of making a living, and I set myself up as a one man business, named Water Rat Models (the name of that beast happens to be the same in both Dutch and English) and started to find work with other architects.   So for a few years I churned out a steady stream of architectural models of one sort or another.   Doing all of this on the table inside Mjojo, the 42 foot gaff rig cutter we lived on at the time, to begin with, and then later when we acquired our Dutch barge (more about her later) I converted the original living quarters on her behind the wheel house into my workshop. 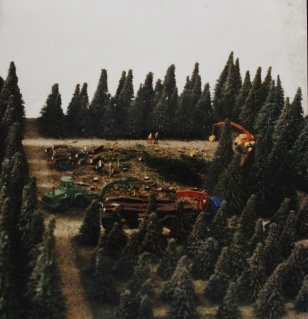 At a much later date I bought what is called a Deckschuit, a sort of smallish barge with a box shaped room on it, and made that into my workshop.  This we tied up alongside our barge (she was also called Water Rat) and I had great fun making all manner of curious models inside that box.

After some years of making models for architects I began to get rather tired of endlessly making models of more or less identical houses, and the inevitable hassles of getting paid for my work, so when I was asked to make some models for NatuurMonumenten ( a sort of Dutch National Trust) I was really happy, and spent many years after than making all manner of models of various bits of the Dutch landscape.  These models were placed in their various Visitor Centres in Dutch National Parks and similar places.  This work I really enjoyed, as in order to make the models correctly, I was very fully briefed about the trees, landscape and other elements by the Rangers who worked in those parks.. Fascinating stuff. 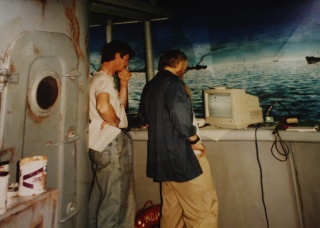 Jan Visser and I working on an “environment” about wartime convoys we made for the ship museum.  Jake (my son) wrote the software that controlled the explosions, lights and sounds 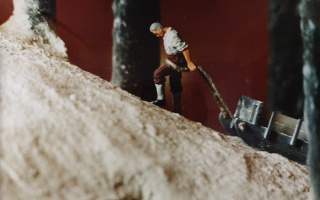 I was then contacted by the Amsterdam ship Museum, and asked to make models for them, which of course I loved too.. Making models of all manner of Dutch historical vessels for the main Dutch maritime museum was really quite something for me.   And of course this led onto making models for many of the other museums in the Netherlands.   So in the end there were models I had made in about 10 or so major Dutch museums… And I was becoming modestly famous in that world as a creative model maker, rather than one who simply made accurate but dead models, mine all had life in them in some way or another, something that mattered to me a lot. 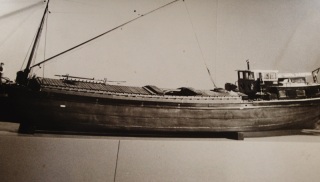 An MGB model for the ship museum

To make it easier for me and the ship museum, we were invited to moor our barge on their jetty, which was fun – and free too.   So Jake spent his first few years living there, and playing with his friends and the guys who worked in the museum… And on one spectacular 5th of December he and his lifelong friend Obbe were introduced to Amsterdam’s Sint Nicolas, who always set out on his boat to “arrive” in Amsterdam from this museum…  So he and Obbe had a private meeting with the Sint.. Seeing those two boy’s eyes bugging out as the Sint came to talk to them was something I shall never forget – A real Dutch moment.

Jan Wijk and I in the Ship Museum

This had been arranged by the Bosun of the museum, a wonderful guy called Jan Wijk who was very fond of Jake, and of us too..

About this tine I was asked by the Theatre Museum (Toneelmuseum) in Amsterdam to come and work with them, repairing, restoring and making new models of theatre stage sets, theatres theatre machines and so on… This entailed me working in the museum, in a large and cheerfully well lit room up near the roof somewhere

A model of a Jenever Distillery for  Rotterdam Historical Museum 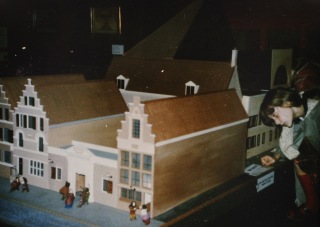 Model of the Stadsschouwburg, Amsterdam – For the Theatre Museum  Mirjam Boelaars made a lot of the people

Here I worked side by side with Mirjam Boelaars, who was working there chiefly as a paper restorer, but being a person of many skills, she was involved in a lot of other tasks there too.  And a very good and likeable colleague as well.

Actually the entire group of people I worked with there were remarkably congenial, and the work was a real and continuous pleasure.   We were all convinced that the work we were variously doing was important, as indeed it was.  And between us all, we created a very lively and important museum… Sadly owing to financial problems, it closed its doors recently. A great loss to the cultural history of the Netherlands.

One project that we carried out there was to make quite large scale models of all the historical theatres in Amsterdam.. we had fun doing that.  Complete with decor, actors, audiences and lighting…   All good fun.

Among all this museum work I was also asked by a couple of the larger zoos in the Netherlands to create models for their visitor’s centres as well.   One was a model of a planned elephant centre in one zoo, which was fun, as it had to show not only the various building and parks that the elephants would inhabit, but also had to show the elephants themselves living and playing in their park… So elephants bathing, performing and so on.. Liked that one. 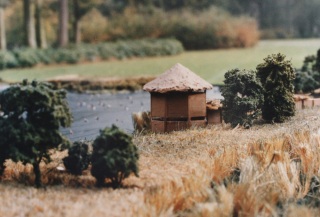 For another Zoo I built a 7x 7 meter wide model of the Amazon, with rain, flowing and flooding rivers, trucks driving along the roads and tracks and so on.

Millions of palm trees, creeks, gold prospectors, saw mills, mining operations, native villages, small towns and pretty well all the elements of the Amazon basin.  It was intended to show the uses and misuses of the Amazon by people.. A fascinating project, involving long discussions with experts from the main agricultural university in the Netherlands…. 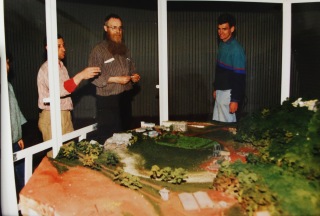 This one I didn’t make on my own, but employed a lot of my more skilful friends to make sections and parts for it, so it was a sort of group creation.. .

So basically for the entire 20 something years we lived in Amsterdam, this is what I did to earn a crust.  And enjoyed most of it enormously as well, and came into contact with no end of intriguing, friendly and skilful people through it too. A good way to earn a living I felt.