Many, many moons ago I worked for exactly one week in a sweet factory, and that one week has been a scar on my soul ever since.

It was one of those summer holiday jobs that all students in my day used to take on in order to get some money to have a decent break in the second half of the holiday, and I had managed to land a job as an unskilled worker at a large local sweet factory.

On my first day I was sent to help the guy who made chocolate.   This was intriguing to begin with, as it seemed to entail him slinging apparently random quantities of milk, sugar and cacao powder into three large vats, each of which had three huge stone rollers rotating slowly in them. 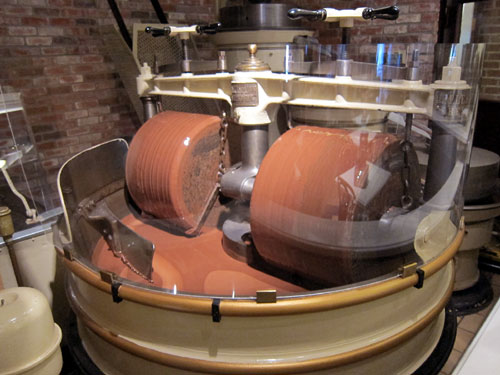 The guy I was working with was huge, ancient and seemed to come from some eastern European country, and to be honest, he rather scared me.

Anyhow, I enjoyed the work well enough, as my job seemed to consist of having a bucket of hot water handy to give him when he asked for it.  A job that was well within my capabilities I felt.

All went well until near the end of the day, when with impeccable timing I managed to put my foot into the bucket of boiling water….   Literally putting my foot in it!

Obviously this did me no good, and I was rushed off to the factory first aid guy, who dealt with me adequately.

Thus, when I pitched up on my second morning to report for work, I was told that I would be put onto other work that day, as I was considered too stupid to be allowed near buckets of hot water.   Fair enough I thought, and asked what I was going to do instead…

What I did that day was make 40 tons of fudge!

The work consisted of standing in front of a row of large cement mixers, and emptying large sacks of different ingredients into the cement mixers, and in due time, tipping the soft fudge out into sort of moulds on wheels, and wheeling these off to another department to be cut up and put into boxes.

So on that day I made exactly 40 tons of the stuff….   result?    have only been able to eat any fudge in the last couple of years….  I am now 73, I did that job when I was about 17.   The resulting revulsion to fudge is simply because we were allowed to eat as much of it as we wanted to, and I ate myself silly as I was making the stuff in such huge quantities.

Think about it for a minute…  40 tons of fudge.   That is an immense amount of fudge.  So the few kilos of it I ate didn’t amount to anything much – except for my stomach of course.

The next day I was told that I would be on icing sugar duty for the day.   I wasn’t quite sure what that might entail, but learned quickly enough.    I was given a pair of thigh high rubber boots and a spade, and told to go and stand in a large box full of castor sugar and then to shovel this sugar into a large rotating grinding machine.   In other words, the caster sugar was ground up fine and thus became icing sugar.

So I spent the day standing up to my thighs in all that caster sugar, and when the sugar had been ground up enough, I went past the grinder to the other side, and emptied the icing sugar into another sort of large box, wading around in it levelling it off..  Amazing how hot deep sugar can become..

Also all the wasps that were attracted to all this sugar ended up being ground up fine too, and went on to become part of some sweet or other…..   Not much quality control in those days.

And so it went on, every day a different job, until by the end of the week they called me in and said that really I wasn’t actually much use to them, so here was my money, and I needn’t bother to come back the following Monday..

Oh well I thought, took the money and went off to get a job selling soft icecream from a van, a job I shall tell you about another day.