In an earlier post I talked about my involvement with CND (Campaign for Nuclear Disarmament), well it went further after a while.

My involvement with CND brought me into contact with some rather more active individuals, who felt strongly that whilst the marches and their attendant demonstrations were worth doing, more was needed to spread the good word.

This took two forms, the first was a splendid bit of “Resistance Hero” stuff, the second was more passive on my part, but much more profoundly life altering in its effect… See below.

So the first, Heroic Resistance worker:

One day at a CND meeting, I was approached by a couple of guys about my age who had a moderately powerful radio transmitter at their disposal they told me – I never actually discovered who was behind them, but I formed the opinion it was the British Communist Party.

They asked me if I thought I could get my hands on some sort of a van, and would I be prepared to help them make illegal radio broadcasts from the van by driving them around to avoid being located and caught by the cops.

This rather appealed to me, so I casually asked Russ (my dad) if I could borrow his Bedford Dormobile occasionally, to which he agreed, being a nice bloke. So I duly found myself driving around various London suburbs late at night, while the two guys sat in the back and broadcast prepared tapes on the TV channel (In those days TV stopped broadcasting at about 11 pm).

But I felt like a real resistance worker doing this.

Oh and we were never caught of course – Not that I seriously believe anyone was taking us seriously enough to be bothered trying to catch us.

I See For Myself The Reality Of Police Action.

Some time later, however, I became involved – passively as it happens – in something much more troubling to me. 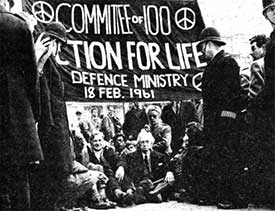 I went to watch a street demonstration held by the Committee of 100, an off-shoot of CND who felt that passive resistance was a better weapon against Nuclear Weapons than simply marching and holding large public demonstrations, and these good folk took to sitting down and blocking roads and similar passive forms of protest. All very genteel in fact, but the authorities hated them with a passion.

I was not a member of this group, but I had heard that for some reason they had decided to stage a street sit-down in a back street in Croydon (Why I have no idea), so I went along to see what would happen, and boy did I ever see what happened.

These good folk were mostly people in late middle age or older, looked to be professional people and had a look of respectability about them. In due course after a bit of speechifying to the small crowd of onlookers, they duly sat down on the road and pavement, thus blocking it totally – not that anyone was trying to drive along this road of course.

At this point the cops turned up in force, and all the people watching very rapidly disappeared, including myself. I nipped over a high wall and sort of hid there, peering over the wall to see what would happen next.

What happened next was a real shock to me, since up till that time I had shared the general British believe that our “Bobbies” were the salt of the earth and only concerned with maintaining public order in the gentlest way possible.

The first thing that happened was that a police officer shouted through a loudhailer telling the good people sitting on the ground that they had to move, and that if they didn’t move within two minutes, he would read the Riot Act, which he announced gave him more or less total power to take whatever action he felt necessary to bring the demonstration to an end rapidly and that they would all be arrested as rioters, which carried some rather long prison sentence.

At this point several of the demonstrators had second thoughts about it all, and stood up to walk away, whereupon the Officer told several of his cops to grab them and sit them down again, which they happily did, with an amazing amount of force.

This they did with a will. One cop taking the feet and the other taking the head of the demonstrator, and carrying them to the Paddy Wagons, but carefully dropping them on route, in such a way that their backs fell onto the edge of the pavement… thus inflicting the maximum pain and probably spinal injury, but in such a way that it would be impossible to prove that the cops had done it intentionally.

Thus systematically these cops arrested all the demonstrators and hurt every one of them in this careful and revolting manner.

By the way, as far as I know, I was the only onlooker while this was happening, as the cops had chased everyone else away before setting onto the demonstrators.

I was still pretty young, and really didn’t know what, if anything I could do about this action on the part of the cops… So to my shame, I did nothing, except to revise my views on our lovely, friendly British Bobbies.

After this I stopped being a revolutionary, and became a model citizen, voting Conservative at all elections and generally behaved myself……….

Were you also involved in any of this stuff back in the 60’s of the last century?  if so, do share your experiences with us here.