In about 2004 we set about creating yet another new life in Angola. A country that until shortly before our arrival in Luanda (its capital) had been involved in a three way civil war that had been raging for some 30 years. This was basically a war against the Portuguese colonists in the beginning, and […]

In about 2004 we set about creating yet another new life in Angola. A country that until shortly before our arrival in Luanda (its capital) had been involved in a three way civil war that had been raging for some 30 years. This was basically a war against the Portuguese colonists in the beginning, and then later became yet another of Africa’s proxy wars between the USA and the USSR. The USA used the South Africans as their tool for this, and the Russians used Cubans as theirs. This was all about diamonds, oil, uranium and several other valuable resources that Angola has in huge quantities.

What it meant in practice was that three armies  – the third being a bunch who owed no allegiance to either the USA or the USSR, but simply wanted to rule the country for their own benefit (money you know) rampaged around the country, killing and destroying anything that got in their way.

We were going to Angola as Lotty (my wife) had landed a job in Luanda International School as the Middle Year Program Coordinator and I was going to be found work upon our arrival.

Anyhow, on leaving France, we went first to London, said goodbye to various family members, and then caught a flight from London to Johannesburg. This flight was a longish one, and owing to some sort of strike with the BA catering department, there was no food on the plane..

This meant real suffering for one such as I.

Then on arrival in South Africa, we were confronted by the reality of what apparently is one of the most violent cities in the world. Razor wire everywhere, signs in several languages on private houses warning of “armed response” to any attempt to enter uninvited, guns galore, newspaper articles about the 20,000 unsolved murders annually in South Africa and a general feeling that this is not a safe or good place to be.

Quite a shock to us after our peaceful lives in rural France I can tell you.

Anyhow, we were met and whisked off to a sort of conference centre/retreat on the edge of Johannesburg for an intensive week of workshops to introduce us to the ideas of our new school, and to get to know our new colleagues, and to be given a lot of background information about living in Angola..

This turned out to be a very pleasant week, friendly interesting people, good food, comfortable accommodation, generally a good experience, one which gave us hope that working in Luanda might be a good experience. END_OF_DOCUMENT_TOKEN_TO_BE_REPLACED

Some years ago, Lotty and I worked in Angola, arriving about three months after the 30 year civil war had ended, and found ourselves in a ruined country, in which travel was tricky to put it mildly.  However, we were invited one day to go and look at the very first oil source in Angola.

This trip was organised by a couple who had been in Angola for a very long time, and both of whom worked in the oil industry there, as do almost all non-Portuguese expats.

Four of us from the International School of Luanda (where we worked) went on this trip, which meant leaving the school at 6:15 am! After recovering from this early start, we rumbled through a surprisingly active Luanda (This was a Sunday morning, by the way) to a section of Luanda called Mirimar, which I have never visited before, and appears to be the part where the rich and Embassies have their being… streets of very expensive looking houses, and the sure sign of wealthy people, lots of broken car window glass along the pavements (the Break the Window of the BMW and Steal Everything from Inside it syndrome). From here, we had a superb view of the port of Luanda, but we were warned not to take any photos of it, as it is considered to be a security risk if someone such as I should happen to have any snap shots of mountains of containers and lots of rusty ships… oh well……

Anyhow, there were about 50 of us, spread over some 25 huge 4×4’s, and after a short lecture beside the road about what we were going to see…… Off we headed, in a most imposing convoy.

It would have made the Mayor of London happy to have seen us, all those 2 ton SUV’s roaring along a perfectly good road. Oh well, you are nothing around here if you don’t have a monstrous 4×4.

We were heading north of Luanda, to a part of Angola that neither Lotty or I have yet seen, so we were very curious about what it would look like. It turned out to be flat….extremely flat, which is one reason there is oil to be found there… the land there is made up of sedimentary rocks, which are soft, and thus weather easily, unlike the granite which makes up about 90% of Africa (We were told all of this by the guy organising the trip).

Anyhow, we rumbled along happily in our convoy, causing people in the various villages and small towns we went through to wonder what the hell was going on, reasonably enough…. we were the event of the day for a lot of them, I reckon.

After a while, we stopped at a bridge over one of the regions main rivers to admire the view across the flat country to the mountains in the distance, but were warned not to stray too far from the cars, owing to the recently discovered presence of landmines all around this bridge (I was worried about how they had discovered them!) We sort of stood nervously around, taking photos of each other for a while, whilst the leader of our intrepid group told us a wee bit of war history, relating to this bridge and road. It seems that owing to the marshy quality of the land in this part of Angola, the only way for tanks to get across it was via this road and bridge. As the enemy (FNLA) neared this bridge, the gallant defenders of Luanda (MPLA) had posted a whole group of Stalin Organs (Multiple rocket launchers mounted on trucks) on top of a nearby ridge with the intention of blowing the FLNA tanks and soldiers to hell and back as they neared this bridge along the road. However, there was one problem… No one had a clue how to use the things!

END_OF_DOCUMENT_TOKEN_TO_BE_REPLACED 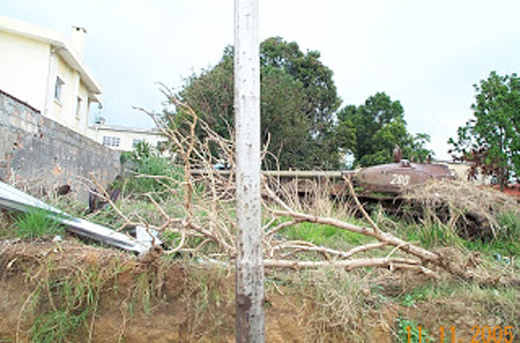 Some years ago My wife and I got work at an international school in Luanda (Angola).  A country that made a huge impression on us.
When we arrived in Angola, the civil war that had been raging in that country for about 30 years had just ended with the shooting to death of Savimbi – the leader of one of the three waring factions, (UNITA) and a sort of uneasy peace was being observed by all the various parties to that terrible war.
It had started as a war of independence against the Portuguese who had colonised the country in the late 19th century, and then once they had gone, it turned into yet another of those wars in which the USSR and the USA fought each other using surrogate armies. In this case it was the Cubans being the strong arm of the Russians, and the South Africans doing the USA’s dirty work for them.
The net result of all of this was a country that had an estimated 17 million land mines scattered around and endless shot up towns and villages, and a more or less totally destroyed infrastructure. Vast numbers of war injured people and an internal refugee problem of gigantic proportions – A real mess in other words.
In our work contracts with the International School of Luanda we were obliged to go away from the school compound during all our holidays, so most of our colleagues went off to South Africa, Namibia or further afield during the school holidays. Lotty and I on the other hand used those breaks mainly to explore Angola a bit, as Luanda itself is, or was, a horrible, slum ridden smelly dirty place. Relatively untouched by the war in the sense of not having any shot up buildings or other physical signs of the war, simply the millions of refugees living in unbelievable squalor around the city in vast slums.
We went off to towns such as Huambo, Lobango and Benguela which showed us a very different side of Angola. Huambo was a rather pleasant small city up country, which hadn’t been particularly damaged by the war, even though it was the city that Savimbi used as his main base, so there were some sections that had been seriously bombed and damaged. Most notably the house where Savimbi had lived, this was a total ruin, with what was all too typical of Angola back then, several dead tanks in the garden. Angola was notable for an almost total lack of garden gnomes, but lots of burnt out tanks in people’s gardens instead.
This was also the base from which the good folk of the Halo Trust set out to clear up all of those land mines the country was so plagued with. This work was being carried out by (among others) two young friends of ours from the UK, Nathaniel and Ali. So on one of our several visits to Huambo, they organised a visit to a mine field for us. This was in a small village nearby, where a largish mine field had been planted around a military base, just on the edge of the playground of the village school. 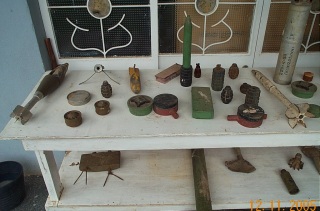 We arrived there and were taken under the arm of the Angolan guy who was in charge of this particular bit of mine clearing. He explained to us exactly the whats and hows of this particular mine field,and then kitted us out with the same sort of body armour that Princess Diana had so famously worn during her visit to these mine fields in Angola.
Not surprisingly this armour is extremely heavy, hot and uncomfortable….. But thinking of the alternative made us extremely happy to be so protected. We also had the labourious process of mine clearing explained to us in fine detail. It is a very slow and painstaking process, and can only be done effectively by means of men digging narrow trenches through the mine field with small hand trowels, and thus locating each individual landmine, and removing it carefully and exploding it later in a pit.
We had earlier been shown some landmines, and the thing that stood out for me was how small they tended to be. Logical enough as the idea is not to kill but to maim. A dead soldier is sad, but not a problem, a severely wounded soldier on the other hand is lousy for moral, and requires other soldiers to help him to an aid station…