Working at the Roundhouse Theatre was both exciting and exhausting

About 1998, an old friend of mine, Robbie Simpson, asked me if I would care to be the next Production-manager at the Roundhouse Theatre where he was working at the time in some technical capacity or other. I thought this might be fun, so I applied for the job and to my considerable surprise got it, in spite of having really no real experience in that particular work. But then, the man who gave me that job – the Director of the Roundhouse Trust – had been in charge of the Egg Marketing Board before taking up his post at the Roundhouse….

Thus began what was probably the most amazing three years of my life.

Being Production Manager there meant being in charge of everything apart from Front of House and office type administration, so I was in charge of a staff of about 30 or so totally weird hippy-like stage hands, electricians, carpenters, cleaners and others, and was totally responsible to ensure that everything technical worked for incoming companies and the public.

It also meant working for anything up to 130 hours every few weeks as a new show came in (The Roundhouse was a sort of short run pre-west end theatre), as most shows came for about a month and then headed to the west end theatres if they were successful with us.

Being literally an old engine roundhouse – the first in the world built by Stevenson in 1836, it wasn’t actually a good structure for theatre, so we more or less completely rebuilt the auditorium and stage for each production…..

We had the most amazing variety of shows there, ranging from classical music concerts, musicals, film shows, huge rock shows every Sunday, drama and so on.. Anything you can think of could and probably did happen there at one time or another.

People who we worked with included, and this list is far from complete:-

And outside the Roundhouse I had the pleasure of working with Frank Zappa as well… A man whose work I admired enormously…. And I am happy to say that he was every bit as pleasant and sharp in person as he seemed to be when one saw him being interviewed. An intriguing man and an incredible guitarist too.

Well to make the list shorter, we had almost every rock musician and band apart from The Beatles, the Doors, Hendrix and Joplin. For the rest more or less everyone who was busy with Rock in the years between 1969 and 1974 appeared there in one way or another…. One highlight was the first of the Stone’s Last concerts… That was circus to say the least, which I shall write about more fully later.

And loads more of the people from that period.. it was an endless succession of famous and less famous people in more or less every branch of the arts of that period.. Fascinating people, some pleasant, some dreadful, some arrogant some humble, a real cross section… But all creative in their particular spheres…

And of course a fair number of people totally lacking in talent too…. in various functions.

And lurking in the background all the time, the truly evil people from the big production companies and record companies, none of whom deserve to live…… Nastier people I have never come across in all my life than some of those slime balls from the big record companies….. Animals of the lowest order would be superior to them.

And on one memorable occasion we had Jimmy Saville there as well…. A horrid tiny little squirt who thought he was the most important person in the world… Nasty arrogant little creature he was…. He pitched up in a huge Rolls Royce, which didn’t suit him as he was so small… You couldn’t see him in the thing.

I also discovered how corrupt the London cops are as well. I regularly had to bribe them to turn a blind eye on things that were happening in the theatre, which was all too easy to do.. slip them a few notes and they were pussies…

And the local drug squad were a thorn in my sides too. The weekly rock concerts were held with no seats, so the 2 or 3 thousand people who came to them all stood. And of course loads of drugs went the rounds….. We knew all the bad dealers, those who sold things like Mandrax and other even less pleasant things and had our own way of dealing with them.. mostly something along the lines of several of my larger guys taking them out to the car park at the back and “talking” to them out there. Always worked well and we managed to generally keep the drug scene within reasonable limits that way… Except when the drug squad decided to drop by, all wearing the most ridiculous disguises. Then things always went wrong, and kids got arrested but never the dealers. Personally I was convinced they had arrangements with the cops, knowing as I did how corrupt those cops actually were.

When we spotted the drug squad guys in the auditorium we tended to put a follow spot on them to warn the kids to be careful…. really infuriated the cops I can tell you, but as we always swept follow spots over the crowd it was hard for them to prove that we were targeting them in particular.

It did have its funny side though, on many occasions I saw kids totally surrounded by drug squad cops in disguise, while the kids surreptitiously did a dope deal.. Generally the cops were not interested in busting kids with a small amount of dope.. not worth the bother for them….. But the kids didn’t know that.

Whilst working at the Roundhouse, we supplied most of the stage crews for the various Rock festivals in London, and for the Rainbow when it first opened, having done most of the installation work as well there for them.. So we got around, Hyde Park, Ally Pally and so on… I also worked on lots of them, doing security, follow spots and so on in endless rock festivals in those years.. all good fun and paid well too.

Not my photo, but this is typical of how the rock concerts looked

So whilst it was a period of working harder than I had imagined was humanly possible, it was great fun but stressful. I always had a budget line for speed on any of our long work stints….. And part of my job was to hand out a tablet every three hours to all the guys, and myself too, of course. We tried to time it so that when we came down from the last tab we were at home and finished with the work.. But sometime that didn’t work out and a number of times I woke up in bus stations, or flat on my face just inside the front door of our flat when the speed wore off and the curtains came down for me. Nasty stuff speed.

Whilst at the Roundhouse I bought myself a 7 ton armoured personel carrier, a thing called a Humber Pig. A real joy to drive around town in even if she did drink petrol like there was no tomorrow. She was my third car, the first being a 1936, 6 cylinder Morris with a hand built body.. a beautiful car.. followed by a 325 cc Citroen 2CV.

When I bought my Pig, she was still painted in British Army green,  and I drove around London in her every day, and used her to get to work in.  But one day I was approached by an Irish acquaintance and told that as this type of vehicle was in daily use in Ireland (this was in the middle of the “troubles” in Ireland), and as such my inoffensive mini tank was seen as a symbol of British nastiness in Ireland, and was thus a target for IRA attack.  And I was told that I should do something about it to avoid that….

So, as you can see in the top of these photos, I repainted her in Afrika Korps camouflage, complete with Afrika Korps divisional signs and so on…    I was shortly after that told that not only was I now at no risk of attack, but that the IRA guys thought it was very funny as well….. Relief all round… 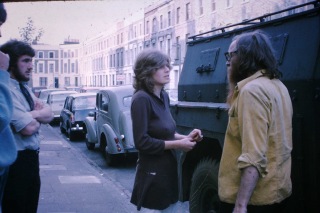 That is me in the yellow shirt, by the way….. Proud owner of a Humber Pig…. The ideal car for city driving and for annoying the IRA as well.

Finally after about three years of living like that, my body said enough was enough, and told me in a rather dramatic way.. We were rushing to get the last things done for the first performance of that crappy show, Joseph’s amazing technicolor T-Shirt, or whatever it is called and a young kid from the production company came up and hassled me. I happened to have a sledge hammer in my hands, and before I knew it I had flipped and had the hammer up and starting to come down aimed at the kids head.. Luckily one of my larger guys was beside me and was quick enough to grab the hammer and stop me killing the kid. So I took note of that, and handed my resignation in the following day. Not because I had almost killed that kid, but because I believed my body when it told me that enough was enough, and I should stop.. So I did.

When I have brought this account up to today, I shall return to my Roundhouse days in more detail, as here I have merely talked about the generalities of that period, but later I shall go into it in more detail.  Stories enough from that period in my life to keep me writing happily for several years… You have been warned!