The internet is a source of the most amazing and extraordinary images, many of which simply cry out to be used as starting points for short stories.   For example, if you see this photo (see below) it has to make your mind begin to wander around all manner of possible stories.

What on earth is happening in this photo?   Why is that nonchalant young woman sitting on her bed apparently being embraced by a large and peaceful bear?  Is the bear comforting her?  Why is she apparently ignoring the bear?  What on earth is she doing, dressed only in her nightgown, with a large and amiable bear beside her?

As you can see, such an image could surely be used by your students (or yourself) as the starting point (or equally, the end point) of a short story of just about any genre.

I have long been fond of using such images to get my writing juices flowing, and the advent of the internet has been a real boon to individuals such as I in this respect.   So much easier than having to go to a library and ploughing through volumes of stuff to find that one exciting image that I need to get me going.

So in order to help you (or your students if you are a teacher in search of ideas) I shall now offer you a random selection of some of those images that I have particular enjoyed.  Images that are not simply strange or weird, but images that seem to be part of some ongoing story, have a content greater then they are in themselves. 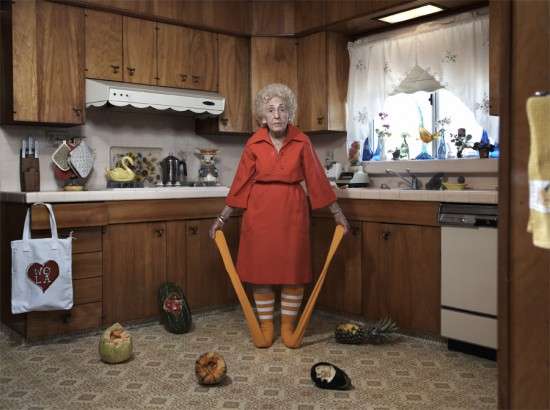 Why, oh why is she doing that????   If you can’t think of a short story around this strange old lady, then perhaps it is time to take up knitting?

OK, so in a fit of hating machines, the owner of this car backed it rapidly through the outer wall of the multi-story car park…  That much is obvious.  But why did he (or she) feel so angry?  How on earth did they get out of the car (all its doors seem to be shut)?   See what I mean?   Just contemplate such an image, let your mind roam freely, and see where you end up.

Or how about this one?

Somehow this seems to sum up loneliness superbly.  The image of that well preserved boat apparently totally removed from its natural environment speaks volumes about being alone, abandoned, but yet alive.  An intriguing juxtaposition of contradictory ideas here.  And certainly an image that has to contain a story that could be very moving and profound I would think.

And to end up with, here is an image that is simply silly….

This image made by Sven Prim (https://thehiddenpeople.com/tag/surreal/)  is not only clever, but is also very funny, and yet…..  That poor geeky guy  off on his own radiates sadness at not being big and butch like the others on the line.    But why are they there, and apparently perfectly happy and at home stuck there like so much wet washing…   Once again, this has to be part of a story surely.

So, there you have a small collection of images that I have found, and which I think could be very useful to setting your mind or your student’s minds off in a range of creative directions.

Have fun with them!!