Back in the 60’s of the last century Lotty (my wife) and I lived on a superb African built wooden Gaff Rig Cutter called Mjojo (the Swahili diminutive of Josephine, the builder’s daughter) of about 42 foot length.

A superbly sea worthy boat which had already sailed almost all the way around the world when we bought her from her builder – an amazing sailor called Rod Pickering. 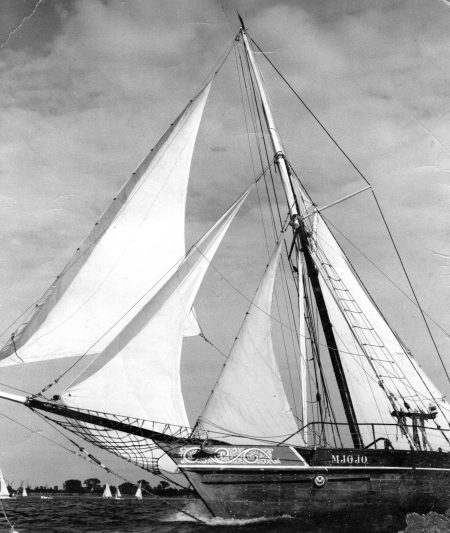 One day, on what was intended to be a pleasant day’s sail out of Newhaven, with Lotty, myself and a friend from the Roundhouse, Mike Waterman, we found ourselves in serious danger of being thrown onto the rocks and drowning.

Before setting out, we had (of course) listened to the shipping weather forecast, which promised us reasonably strong winds and clear visibility.  So, we cast off from the inner harbour of Newhaven (which for you non-Brits, is a fishing port on the south coast of England) and set out for a pleasant day on the English Channel.

After about an hour’s enjoyable sailing straight out to sea, the weather began to change, the wind getting stronger and stronger.  I listened to the shipping forecast again, and it was now telling me that we were about to be enveloped in a Force 12 to 14 storm.

Force 14?   What was that in God’s name?   I had never heard that there was anything stronger than force 12, but apparently it did go up to 14, which effectively was a hurricane…

We thought we probably had time to turn around and get back to the shelter of Newhaven harbour, so we duly turned about and headed for shore and we hoped, safety.

But luck was not with us, and the wind got stronger by the minute, and wasn’t in a good quarter for us to sail our remarkably heavy (24 tons) Gaff Rig cutter.   On top of which, the wind, which was blowing away from the shore, and thus more or less coming from where we were trying to sail to, the tide was also coming in, so we found ourselves in the unpleasant situation of wind over tide, which apart from any other effect, causes the waves to get higher and higher, as the wind tries to push the sea in the opposite direction to the tide.

So we were bucketing up and down, huge waves breaking over poor old Mjojo, and things were getting pretty desperate.  We found ourselves being pushed into a bay to add to our troubles, where the sea was simply boiling, a mass of huge, confused waves, all of which made doing anything effective on Mjojo damn near impossible.

And then to add insult to injury, the sails began to tear from the huge forces of the wind on them, and for us to even get the sails down was the next best thing to impossible, bouncing up and down, from side to side and corkscrewing over the waves as we were. Not to mention the difficulty of moving around with our bulky life jackets and safety lines as well.

So while Mike and Lotty did their best to pull down the somewhat tattered remains of the sails, I went below to start the motor, in the hope that we could motor out of trouble.

By this time we were well and truly in the bay, and rapidly approaching the rocks and cliffs of the shore there.

I managed to get the engine started, and went back on deck to try and drive us out of the bay, along the coast and into the relative safety of Newhaven harbour.

But this was not to be.

Within minutes the engine began to overheat and slowly but surely it ground to a halt, leaving us in the horrid situation of being driven rapidly onto a very rocky shore, with absolutely no way to control Mjojo.

The only thing we could do was to drop anchor and hope that it would hold us until the storm abated, after which we could sort ourselves out somehow.   So off I crawled up to the bows to throw the anchor overboard, which I managed to do with some considerable difficult. Not least because as I threw it, i suddenly realised I had no idea if the end of the anchor rope was actually secured to Mjojo as we had never let the entire length of the rope out before.

So as the rope had jumped out of its guides owing to the violent movements of Mjojo, I had no recourse other than to try and hang on to the anchor rope with my bare hands attempting to get it back around the anchor posts so I could control it, and tie it off when the anchor had enough rope overboard.

I should mention that the sea wasn’t very deep at that point as we were almost on the shore by then.

Happily it turned out that the rope was in fact secured to Mjojo, so when the entire length of the rope had gone overboard, we didn’t lose it.

Then the next worry…. Would the anchor grip the sea bed well enough to hold Mjojo?  To begin with it didn’t, and we started to drag the anchor over the sea bed and moved steadily closer and closer to the shore and very probably our deaths.

Happily, the anchor suddenly caught on something on the sea bed, and held….

We discovered later that our anchor had snagged the underwater telephone lines from England to France, which happily turned out to be strong enough to hold Mjojo splendidly – Thanks to British telecom for that!

So, there we were, me with no skin left on either of my hands – having burnt it all off trying to hang onto the anchor rope, the other two crew members exhausted and scared, but in no way panicking and Mjojo bouncing around even more unpleasantly as she pulled on the anchor line.

We took stock of our situation, and decided that really we had only one option open to us.   Set off alarm flares in the hope that a life boat could come out and help us to get ashore again -with or without Mjojo.

We grabbed our bag of rocket flares from below, and I did my best to point the first one straight up into the sky, yanked the short cord on its base to ignite it, and promptly shot a hole in what remained of our mainsail..

The second attempt was not much better, owing to the violent movements of the boat, this one shot off across the top of the waves and disappeared into the darkness of the storm.

Finally I managed to get one to go roaring up into the sky, and then come gently down again on its parachute… I then set off a couple more of them successfully, on the basis of one is good four is better, and we settled down to await whatever fate had in store for us.

After about an hour we saw the most glorious sight, a full size life boat battling its way over the waves towards us.

They hove to about 50 or 60 meters from us, and indicated that they couldn’t get any closer, owing to the violence of the seas, but that they would throw us a line and attempt to tow us back into harbour.

Getting that line to us was a hell of a game obviously, but after a number of failed attempts it was achieved, and Lotty took it to the bows and secured it to our anchor posts, and cut away our nylon anchor line, and the lifeboat set to trying to pull us out of the bay.  This was a very slow process, since MJOJO was both heavy and very deep hulled (she drew about 2.5 meters all along her 42 foot hull), so the sea had a good grip on her.  But manage they did, and we started the long and slow process of being towed to Newhaven harbour.

Lotty at the helm, me sitting miserably with my flayed hands and Mike keeping the two of us as cheerful as he could (great guy to have in a crisis!).

Finally (after about 2 hours), we arrived at the harbour mouth, and saw the huge crowd of people waiting to see us come back into harbour.   So being Brits, we stood up and did our best to look like weathered and skilled seamen, waving graciously to the gathered masses on the harbour wall as we were towed slowly to the life boat station.

The first thing that happened as we staggered off Mjojo into the lifeboat station was the chief life boat guy came over and started to bawl me out for not having even tried to catch the line they threw to us out there and then compounding the crime by letting Lotty take it to the bows and tie it off., so I showed him my bleeding and messed up hands to show him that catching ropes was not really an option for me.

We were taken into the life boat station, and in true British style, there were several women, with big mugs of hot, sweet tea waiting for us.- Britain’s answer to any problems.

The life boat guys then told us that if they had not managed to tow Mjojo clear of the bay, we would have had to jump into the sea and they would then have done “their best” to fish us out of the sea…   Hmmmmm.

So, all that remained was the interview with a young cop to tell him exactly what had happened, and then me off to the local doctor to have my hands dealt with.  By this time of course they were hurting like hell, as the adrenalin had drained out of my system once we got into the harbour and the danger was over.

For quite some time I went around with two huge white paws, as my hands were all padded and bandaged.  But luckily they felt that no plastic surgery or such like was needed, and in due time my hands grew new skin and now look as if nothing had ever happened to them… But they did look  awful at that time…  Literally no skin left on both the palms and the underside of most of my fingers.   Just nasty red meat.

Definitely a day to remember, but not to repeat!

If you know Mjojo (she has just recently been fully and lovingly restored) please share any thoughts you might have about her here, or of you have also been caught in a terrible storm, share that experience with us too.