As I hope you will have read in part one of this stirring account of our lives on boats, we had just bought the Water Rat and managed to get it as far as Alphen on the Rijn where the engine had blown up.   So there I was, on my own in a shipyard wrestling with the problems about choosing a new engine for our later to be trusty vessel.

An odd business altogether really.   Other people dashing about on our boat was a new experience to us both – Lotty had driven down and joined me on board.

Anyhow, to cut a long and painful experience short, in due time a 6 cylinder Deutz was built into the boat, and all connected up and tested, and so off I went again, still alone in the boat as Lotty had to drive the car back to Amsterdam.

Happily this time it all went smoothly, including getting through the lock at the start of the canal.   The only real problem I had was the huge Pusher tugs with their 12,000 ton lighters in front of them hurtling along at 30 kilometers, could and did  pick up my boat in their bow wave, which was alarming to say the least – I found myself surfing on a 28 meter long vessel, not a good idea!!  I discovered that if I put her into reverse and gave it all the power in her, we came off the bow wave and could carry on calmly.  It was then a case of quickly putting her into forward again and carrying on before the bows swung around and I ended across the canal.  Altogether a dodgy situation!!

At this time we were based in the north of Amsterdam, at a place called Nieuwendamerdijk where we had tied up with Mjojo for some time, so we tied up the Water Rat in the same place and carried on with our lives.

We quickly fell foul of the Harbour Service of Amsterdam, who came around to charge us the fee for being in Amsterdam, and quickly told us that we could only stay in Amsterdam for about 6 weeks and then had to go away for some days, and then of course we could return………..

So, that was the story of our lives for quite some years – tied up in Nieuwendamerdijk for about a month, and then off to Weesp or some other town outside Amsterdam.  All a bit tedious, but it did force us to learn how to drive the good old Water Rat around, and get her through locks safely and generally learn how to cope with such a large vessel.

We fitted remarkably well into the local life in Nieuwendamerdijk and became good friends with both other boat dwellers (mostly professional cargo carrying folk) and shore dwellers too, and had a very enjoyable number of years there, even with the everlasting having to leave Amsterdam at regular intervals.

At this time, we lived in what was called het Roofje, which is the accommodation behind the wheel house. which was very civilised, consisting of two small bedrooms, a bog, a sitting room and a small kitchen, and Jake lived in het vooronder, which was a double cabin right up in the bows of the boat.

The actual hold was still as it was in the time of the previous owner, who was a professional skipper, a 17 x 5 x 3 meter long empty space, which we intended to convert into our home in due course. 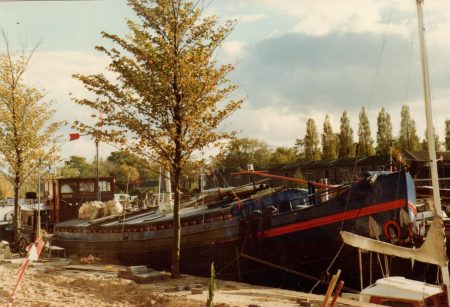 So, that is all for this installment….   More to come, of course!